Last night I got to experience the rousing free production of “Romeo and Juliet” by SF Shakespeare on the grounds of Sequoia High School.  Directed by Rebecca J. Ennals, this production has sterling performances by its lead Lauren Spencer (Juliet)  and Carl Holbrick (Romeo).  But where the production really shines is in its supporting performances:  Lord Capulet (Michael J. Asberry) Lady Capulet (Valerie Weak) and the Nurse (Gwen Loeb).  Ms. Ennals has a deft hand also with Paris, the Prince, the sword fighters and kitchen staff.

The pace of the show is quick and witty, with rambunctious references to Shakespeare’s text and images.  Little is lost in translation.  The balcony speech, performed with fire engines blazing in the background on El Camino, lost none of its luster in the night.  This was a testimony to the tenacity of the performers and the beauty of the evening.

Children and adults were captivated by the sword play and antics of Mercutio, Benvolio, and Tybalt. There is a program specifically for children (free) that starts a half an hour before each show.  This, along with the plot synopsis in the program, quizzes, and bringing a blanket or picnic basket go a long way to making Shakespeare a kid-friendly experience.

Next Week:  Gearing up for school with classroom ideas.

Neva Hutchinson. Is a writer, teacher, actor, and director.  She’s written ” Hey Shakespeare” a book and play for middle school teachers.  To contact her, write nevamh@yahoo.com. 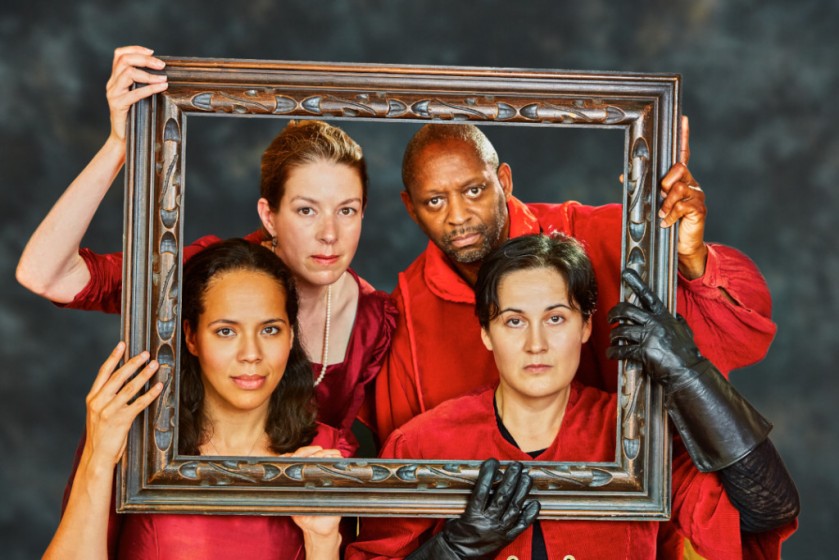 Redwood City is soon to have the Capulets and Montagues together on one stage in August, directed by Rebecca J. Ennals.

The Capulet family portrait is made up of Valerie Weak, (in the upper left corner), as Lady Capulet, and then, clockwise, Michael J Asberry as Lord Capulet, Carla Pantoja as Tybalt, and Lauren Spencer as Juliet.

Valerie, a very busy actress, had a chance to discuss how things were going with “Romeo and Juliet” in San Francisco’s Shakespeare in the Park.

What do you find exciting about playing this role?  I’m excited to be part of a very strong cast – working opposite strong actors makes me do my best work.  I’m also excited by the way the Capulet family was cast – we are a biracial family – I’m white, Lord Capulet is African-American, and Juliet is played by a biracial actor.  We don’t talk about this or comment on it onstage, but I’m happy that folks from biracial families can see a family that looks like theirs when they come to see this production.

What strengths does Lady Capulet bring to the family dynamic?  Lady Capulet is more even-keeled than her husband – in the scene where he gets upset with Juliet for not wanting to marry Paris, she works to calm him down.  At the same time she’s got a strong sense of justice and I really love when she pleads with the Prince of Verona to punish Romeo for Tybalt’s death.

What are the challenges of working and performing outdoors? Weather is one – it’s hot to wear our costumes on hot days.  Sometimes, when it gets dewy at the end of the evening the stage floor is damp and a little slippery, which makes us all have to move more slowly so we don’t fall.  And, last weekend, an ice cream truck drove by during a particularly dramatic moment, and added some ‘mood music’ to the scene.

Have you ever played the part of Juliet?  As an acting student, I played Juliet in a scene study class doing one of the Juliet and her Nurse scenes.  Also, I once worked on a touring production to introduce students to Shakespeare that included ‘greatest hits’ from several Shakespeare plays – I got to do Juliet in the balcony scene for that one (as well as Marc Antony in Julius Caesar!)

You can see Valerie as Lady Capulet in Redwood City outdoors at Sequoia High School.  This production was made possible by the Redwood City Civic Cultural Commission.

Bring a picnic and a chair or blanket to sit on.

See you under the stars!

Neva Hutchinson has written a book, “Hey Shakespeare! From Page to Stage in 4 Weeks”.  For more information, you can contact her at nevamh@yahoo.com